Jews have been in Italy 1,200 years longer than Yiddish has even been a language. So, why then, is so little known about Italian Jews?

Few think of liquors as preserving fruit. Inside of Italy the concept is usually referred to as ‘rosolio’. The only one that is particular famous outside of Italy, is limoncello, which is just one of many.

Like the words ‘pickles’ or ‘pickled’,  in English, ‘sott’aceti’, means ‘under vinegar’, which uses an acid to preserve. These are some of the oldest dishes on earth, all across cultures. They are among mankind’s oldest inventions.

The Logistics at a Glance​

When: Throughout the year. View Calendar OR Write us for more information

Where you sleep: Wherever you like. See our recommendations around town once booked. Many are in the former Jewish quarter.

Best way to arrive, depart, maximise your time with us: Everything is spelled out in our Student Services. You’ll be given access upon booking.

Book now. Or write us for information.

The Jewish Cooking of Southern Italy

Jews have been in Italy 1,200 years longer than Yiddish has even been a language.

So, why then, is so little known about Italian Jews?

Part history lesson, part scholarship, part filmmaking, part social anthropology, our The Jewish Cooking of Southern Italy was born as a secular, hands-on food and wine course, open to everyone, regardless of faith or observation.

We’ll survey the food and wine of five Southern Italian regions, to discuss their unique histories and how Judaism expressed itself, culinarily. And how it’s expressed today.

Our Lecce school has always been in the former Giudecca (Jewish quarter) of Lecce and we take full advantage. Whether it’s the Jewish museum in the former Synagogue, ‘Le Sante’ of the Salento or just having morning coffee on the old ‘soap makers’ street, our course is urban, modern and alive. 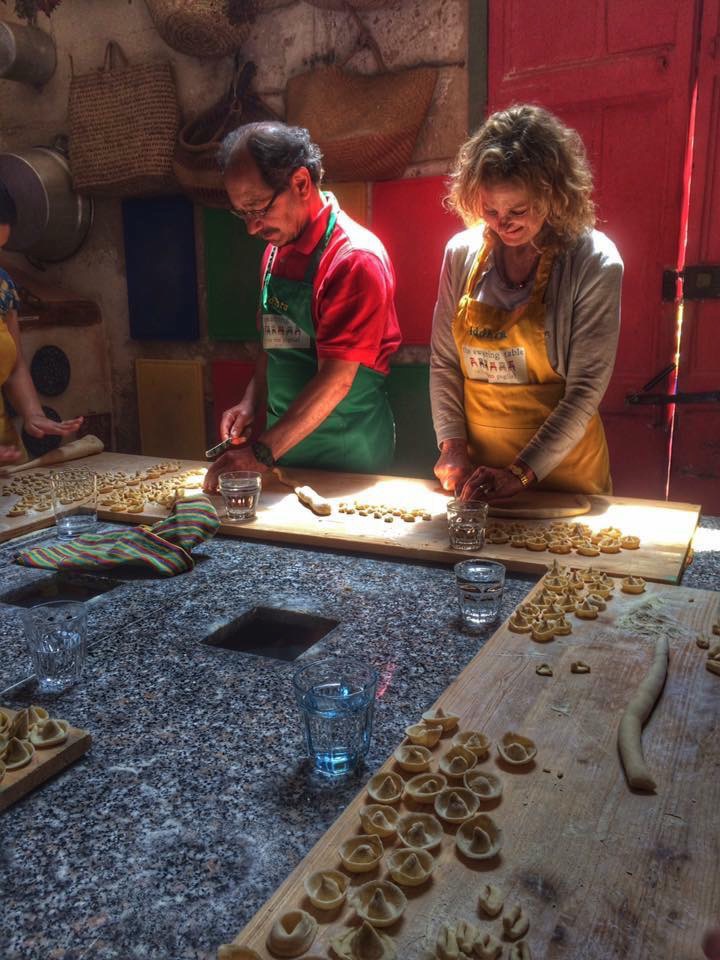 We’ll begin each meal with a short discussion about Jews in Southern Italy- periods of peace and periods of friction, the movement of people, ingredients and ideas- and how Southern Italy helped shape it all.

We’ll then head into the kitchen together for a hands-on lesson, how to make the fresh pastas of Southern Italy, how to prepare whole fish and how to cook just about any vegetable in the Southern Italian manor. You’ll learn about the wines of the Italian south, with a focus on its migration from The Fertile Crescent to Southern Italy, of pruning and modern fermentation techniques, and short primers on how to better taste and appreciate what’s in your glass. And of course you’ll taste over 20 different wines, enjoying them alongside the food you just prepared.

You’ll learn first-hand about extra virgin olive oil, and how it’s the foundation for everything in the Mediterranean. You’ll learn to taste critically, to know the difference between the mediocre and the sublime. You’ll see the similarities, the commonalities, the overlap of Christianity and the Jewish cooking of Southern Italy, the shared love of extra virgin olive oil and sun-ripened Mediterranean ingredients.

But it just might be the time around the Southern Italian table that you might love most, the spirit of conviviality, of gathering to cook, eat, drink and laugh together, of partaking in one of the most satisfying and civilised actives that we do as human beings.

You don’t need to be Jewish or have a Jewish background to enjoy this course- we aren’t, and we don’t- but you do need to be charmed by sun-ripened food and wine, open, and of course curious to learn about one of the world’s great cultures, that of  Southern Italian Jews.

It’s a class we have been wanting to teach for years.

Held three times a year in the historic centre of Lecce.

Is the course Kosher? No. This is a cultural course and is open to everyone. Jews that come are usually reformed, and you could describe the menù as Jewish-themed versus obeying any religious laws.

Do you need to be Jewish. No. We’re not. Everyone is welcome. To date about 30% of those that have attended have been other faiths. Or none.

Book now Or write us for information.